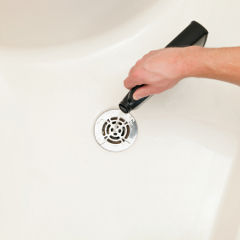 To keep your drains open and free flowing, there are several easy, inexpensive things you can do. For kitchen drains, for example, you could try to use dishwashing liquid. Your kitchen drain will remain fast and clear if you apply generous amount of dishwashing liquid into your kitchen drains and put sink stoppers into your basin. Fill your basin up with cold tap water and then pull the stopper. The dishwashing liquid will break up grease and grime that was accumulating in the pipes and the water rushing down the drain will take anydebris away to the main drain. If you think you have heavy grease build up (even though grease should NEVER go down the drain), try using hot or boiling water instead.

Please note that if your drain is clogged, you should call a professional to remedy the problem. They will snake out your drain and avoid you having any further problems. Liquid drain openers will often cause more harm than good, especially if you don’t have PVC plumping. Galvanized and copper plumbing will be eaten away by the caustic chemicals in these openers, and this could lead to hundreds or thousands of dollars in damage, as walls and cement may need to be broken and removed to access the corroded pipes.

Dishwashing liquid can help with slow bath drains as well. You can use the same process in a bath, shower, or bathroom sink drain as you would for your kitchen sink. You can also use this process to keep your toilet drain clear by putting the dishwashing liquid in the overflow hole at the top of the toilet bowl, when you flush, the grime that has built up will be flushed away.