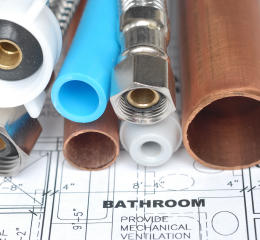 There is a lot of debate among plumbers and do-it-yourself plumbing enthusiasts about whether or not copper piping or PVC piping is preferred. Both of these types of piping have pros and cons, and it is up to you to weigh all the facts and decide what is best for your home. While copper piping seems to have received a large market share, it may not be ideal for your plumbing project.

Copper is a metallic element that just so happens to be a great conductor of heat and electricity, making it commonly used for water piping among other things. It is light and strong and often used for corrosion-resistant parts.

PVC is a common abbreviation of Polyvinyl Chloride. These pipes are made of a vinyl polymer. It has become more widely used in a variety of construction projects because it is durable, easy to assemble and inexpensive. PVC pipe itself is not usable in all plumbing applications; regular PVC can become toxic when heated, such as with hot water pipes. The PVC piping most commonly used is CPVC, as it is safe even when transporting hot water. CPVC stands for Chlorinated Polyvinyl Chloride.

As mentioned, PVC pipe isn’t safe for all plumbing applications. While no illnesses or deaths have been linked to the use of CPVC piping in homes, there are many who feel that it may not be safe. They worry that the chemicals used in the production of CPVC may still present a health risk. Extended exposure to some of the chemicals used to make these pipes have been known to cause major health concerns.

Copper on the other hand is thought to be safer, preventing little health concerns to those consuming potable water from copper pipes. Copper can corrode if the water is acidic. Copper in larger amounts has been linked to certain health risks like Alzheimer’s. If the pipes have corroded, copper may be ingested along with the water. The body expels copper relatively quickly, and small amounts of copper are safe. The risk with copper is a bit more minimal.

Pros and Cons of Copper Piping

There are several reasons to prefer copper piping. Copper pipes are durable for the long-term with non-acidic systems. Copper is bacteria resistant, very fire resistant, and earthquake tolerant. It can be incredibly flexible and bent around joints. Copper piping also has a small internal diameter, much smaller than CPVC, which lets it fit in smaller, tighter places.

There are downsides to copper piping. Some people report metallic tasting water with their copper pipes. If the water is acidic, pinholes can form, causing leaks. Copper piping installation isn’t something to undertake casually however; it is labor intensive to install and requires a skilled plumber. It also is more expensive than CPVC.

Pros and Cons of PVC

There are many positive things about CPVC pipe. It is resistant to corrosion and abrasion. It also is less noisy, even with higher water velocities. It is easy to install, and is viable for do-it-yourself enthusiasts. It is also less expensive.

PVC pipe has drawbacks however. Some complain of a plastic taste in their water. The pipe is also more delicate during installation; if it is dropped or stepped on, it can crack. Also, the solvents used to join fittings and pipes need to be well-ventilated during installation. In addition, the inner CPVC pipe can support bacteria growth.

Copper or PVC pipe could be ideal for your home. Many factors need to be weighed when choosing which type of piping you want. Cost considerations are important, as is ease of installation. At the same time, different taste preferences and health concerns can come into play when selecting what type of piping is right for you. While both CPVC and copper piping have the same function, they are quite different and you should select whichever is best for you.